Where container handling equipment is used and how it works.

It is necessary for the person operating the equipment to have the appropriate authorisation to operate it. Entitlements will be acquired in a special course ending with an examination before an UDT commission. 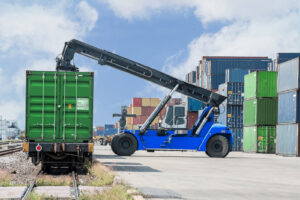 The Kalmar ECO Reachstacker not only means greater efficiency in container terminal operations. It also ensures that operators are prepared for the future electrification of equipment of this type.

Kalmar ECO Reachstacker was presented in 2015. Many people were sceptical. This was because they claimed that using a smaller engine capacity compared to the standard reachstacker engine would be a bad solution. Over time, it became clear that those who thought so were wrong.

The power transmission system of the reachstackers is of great importance. The one used in the Kalmar ECO is the most advanced of its kind in the world. What are its special features? It features a hydromechanical infinitely variable transmission system. Unlike the standard unit, this one does not require constant braking or acceleration by the operator,

The gearbox handles all activities that are related to the drive of the machine. This is because the driving speed is independent of the engine speed. This allows the motor to run at a constant speed all the time. The gearbox takes care of changing the speed of the machine. This results in less exhaust fumes, less noise and less fuel consumption. It also increases the efficiency of the unit by extending the refuelling interval.

The Eco Reachstacker is a far more economical unit. Fuel consumption is about 40% less than that of 5 or 10 year old machines with standard drive trains.

The reduction in fuel consumption is financially beneficial. In addition to this, this ECO Reachstacker is able to perform approximately 50% more movements per hour compared to standard equipment. This is possible due to a combination of the management of the drive system and the working hydraulics. This is also influenced by the reduction in refuelling time.

Volvo Penta, which manufactures the engines for the ECO Reachstackers, has started producing even newer drive systems. These are capable of reducing harmful CO2  Even the 90%. They can run on HVO fuel. It is a product that 100% consists of renewable raw materials. These are products such as vegetable oils and animal fats, still with the same or almost identical chemical structure to diesel fuel. The European Union directive indicates that this type of fuel has no negative impact on the environment. In addition, it is the only liquid fuel technology that can meet the requirements to reduce carbon particulate emissions by up to half by 2030.

ECO Reachstacker thus helps to combat climate change. All by reducing the carbon footprint of the logistics industry. Kalmar attaches great importance to environmental sustainability. It also sets a good example in terms of sustainability standards for other companies in the industry.

« Why it's a good idea to perform regular maintenance on mobile platforms.
Repair, maintenance, overhaul of cranes - when to do them! »
Sign up for training
Inquiry