In order to ensure safe and efficient work at height, most often on a construction site, at blocks of flats, houses, monuments, any building reaching above the available tools used by the construction team, a façade scaffold is installed. It is a makeshift structure that is differentiated according to the materials used in its construction and its function. Its main purpose is to facilitate work at heights and to ensure the safety of the team working on its platforms (also included in its assembly are safety platforms which protect against falling to the ground from a great height). This is why it is so important to assemble scaffolding correctly, meeting both lifting capacity and ergonomic requirements. In the following text, we will take a look at the most common types of scaffolding and detail the mistakes made when assembling scaffolding. 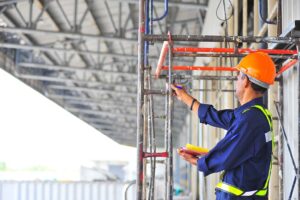 What mistakes should the fitter be careful about when erecting the structure?

First of all, we aim to provide others, and also ourselves, safety, so during the safe assembly of each subsequent floor, we should remember to install a railing in the circulation path, the correct sequence is: main railing, intermediate railing, curb board, and in both directions from him, completing any free space according to the above-described scheme of operation. At the end of the work, install the balustrade elements from the front of the scaffolding (from the side). If the distance is greater than 0.2 m to the place where facade works are carried out, we should attach a railing, also on the inside of the scaffolding, to ensure full safety of employees. We can use scaffolding frames for this, which are characterized by the fact that they are adapted to two-sided assembly of the railing. Bearing in mind that our safety depends on the correct installation of railings, let us analyze the most common mistakes regarding their installation. The factor exerting the greatest influence on their defective functionality is the use of incomplete protections, especially omitting the installation of the curb and intermediate railing, the lack of support from the side of the wall when the platform is moved away from it by a distance of more than 20 cm or to the side (from the front) of the scaffolding. When disassembling the scaffolding, remember about your own safety, which may result in a risk of falling from a height when unfolding the railing.

Frame scaffolding - these are the most common derivatives of facade scaffolding, why? Because their structure, consisting of supports, i.e. flat frame structures, allows for quick assembly of facade scaffolding, i.e. with a straight surface. They are located next to the building that requires work at height, to which they are connected by means of anchoring. They are used in general construction, and above all in cubature (construction of permanent objects of a large volume) - residential. A common type of them is the so-called Warsaw scaffolding, used for minor renovation and construction works of small facilities.

Modular scaffolding is a common solution during works requiring the use of this type of structure. As the name suggests, they consist of modules, i.e. introduced spaces between separate elements such as crossbars - they contain the space needed to fit other parts of the scaffolding. A separate element are also the stands, which are connected with other accessories such as transoms, platform transoms and bracings by means of specially profiled heads and wedge locks. Thanks to this, it is possible to assemble geometrically complex structures, so it's no wonder that they are widely used in industrial works, e.g. in power plants or shipyards. Also, the elements of the modular scaffolding can be used to make the facade scaffolding, however, it involves much more work and skills as opposed to the assembly of the frame structure, hence its low use in urban construction. The versatility of the functions fulfilled by this type of scaffolding and the general complexity and compatibility of its elements can be used in the organization of mass events (stages, stands), fairs, exhibitions, winter covers, etc.

The scaffolding itself consists of load-bearing poles and horizontal poles connected to each other, on which wooden platforms are usually placed (fastened). Usually, scaffoldings are assembled for specific works, after which they are dismantled, they are not movable and cannot reach the other side of the block (assuming that no fixed scaffolding has been installed on the other side), therefore mobile scaffolding should be distinguished. Designed for multiple use in the area of facade / construction works, we also call them mobile scaffolding. They are designed for horizontal displacement, and do not require disassembly into components. Their construction consists mainly of a system running tower built of the so-called ladder-frames, we can also meet them in the form of frame or modular scaffoldings equipped with additional elements enabling them to move along the walls, walls of the building, such as base beams, road wheels. They are most often used for short-term renovation and maintenance works, because they require frequent repositioning of the entire scaffolding structure. 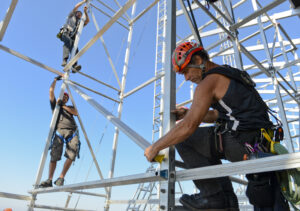 What requirements should a fitter meet to take up the profession and perform the assembly and disassembly of scaffolding?

First of all, it should have what you need entitlements to practice the profession, and thus should complete an eighty-hour training course at a centre that meets the requirements of the Coordination Centre for the Training of Machine Operators. In order to obtain a document certifying the acquisition of a licence, one must pass an examination (obtain a positive result from both theoretical and practical tests) conducted by a commission appointed by the Institute of Mechanised Construction and Rock Mining in Warsaw (IMBiGS).

ERGON CENTRE FOR THE DEVELOPMENT OF STAFF provides courses and prepares candidates to take both theory and practical examinations. We have been operating on the training market for the last fifteen years, we have professional staff with extensive professional experience and our branches are located throughout Poland. We guarantee thorough training, which can be taken even by someone without basic knowledge - we will teach you everything. Our requirements are only that you have at least a primary school education, are at least eighteen years of age and have no contraindications to working on the job. After completing the eighty-hour course, you will receive a certificate of completion. The next, and final, step is to take an examination, after which you will receive a certificate of competence in your Working Machine Operators' Booklet, i.e. a scaffolder's booklet, and will be able to start work. You will find all the information you need on the training-udt.pl website, where you will find our full range of services and training courses. You are very welcome.

« What are tower cranes?
Cranes and their purpose »
Sign up for training
Inquiry