Is it profitable to be a photovoltaic fitter? 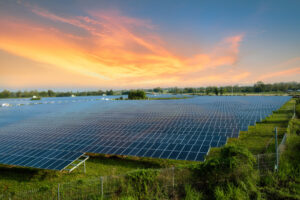 Solar panels are an extremely revolutionary invention when it comes to obtaining energy. This is an exceptionally ecological idea that is used by more and more households. Thanks to this, you can really save on electricity bills. However, we will not install solar panels ourselves, because we usually do not have the appropriate skills. For this we need an installer. People with exceptional self-determination can learn to install photovoltaics and thus have the opportunity to work in this position. In this text you will learn what steps you need to follow to become an installer.

At the very beginning, you should focus on the essence of an innovative idea, which is photovoltaics. This process is used to obtain electricity from the sun - usually thanks to solar energy. Electricity is generated by the conversion of solar radiation into direct current, which occurs thanks to photovoltaic panels. At a later stage, the direct current changes into alternating current. Only this type of electricity is used in the building. It is possible to produce enough electricity to even generate a surplus of energy, but the user can use it whenever the need arises. Other renewable energy sources, such as wind, biomass and tides, are less efficient and can only be used where appropriate. On the other hand, solar energy can be obtained literally anywhere on Earth. Although the amount of this energy varies at different latitudes or at different times of the day, photovoltaics are still unbreakable compared to other alternative sources.

Solar panels play a key role in the entire photovoltaic process. Solar panels are composed of modules containing several solar cells. These cells are composed of semiconductors such as selenium, silicon and germanium and have at least two layers - one is thin and the topmost, and the other is at the bottom of the cell. The photovoltaic phenomenon itself is physically and chemically complex. The semiconductor, which is the main component of a solar cell, absorbs (or absorbs) solar radiation. As a result, electric charge carriers are created that cause the flow of direct current. Its amount is proportional to the power of radiation absorbed by the photovoltaic cell. The modules are placed in frames made of aluminum or steel and additionally containing tightly fitting protective glass. Thanks to this, the cells will not be damaged. To ensure the proper use of the photovoltaic system, several modules are connected in series. There is a possibility of a parallel connection which provides higher values of the output current.

The functioning of our photovoltaic panels depends on the amount of sunlight. Each region in Poland is characterized by different values. They are determined by the intensity of the sun's radiation. In the whole country, insolation is in the range between 900-1200 kWh / m2. Even the smallest of these values provides the appropriate intensity of solar energy, which helps to obtain electricity from it. In general, Poland is geographically well located, so you can invest in photovoltaic panels. Most sun reaches the vicinity of the Lubelskie Voivodeship, as well as the central part of our country. Solar radiation is not distributed proportionally to the whole year. The greatest insolation occurs in spring and summer, because then as much as 80 percent of its annual sum is accumulated. The smallest amounts of sun reach during winter. However, there is no need to worry that the energy will run out, because even with cloudy skies or polluted air, the right amount of sunlight will reach us.

Will photovoltaics pay off for us?

Thanks to the installation of solar panels and obtaining energy from them, we can enjoy lower electricity costs. Additionally, it is possible to sell surplus electricity obtained from this alternative source. Properly mounted panels allow you to reduce electricity costs even to zero. Investing in photovoltaics is a long-term one, because the panels can serve up to thirty years. This will pay off within a third of the time, or about ten years. Whether it is fast or slow, you should judge for yourself. However, when we consider the long lifetime of solar panels, it is really a short period. In order to reduce the cost of electricity, it is becoming more and more common among farmers to install photovoltaics in fields and on the roofs of farm buildings. This is a great help for farms that can use energy from a renewable source such as the sun. There are many programs that finance the installation of solar panels, such as Clean Air or Energy Plus. Also, farmers can apply for an investment allowance for the installation of environmental facilities in the amount of 25%.

When we apply for a job as a solar panel fitter, we think this profession is all about installing solar panels. However, the activities of such a person are slightly more complex. First of all, in addition to the installation itself, you need to connect the solar panels to the inverter. Everything still needs to be connected to the electrical system. Due to the fact that a photovoltaic needs to know how to handle electricity, it should have entitlements - specifically in categories D and E. These qualifications are acquired after completing the course and passing the exam. An important aspect is also having a certificate issued by the Office of Technical Inspection. Such a document is valid for five years from its issue. There are no specific education requirements. A photovoltaic fitter should be familiar with construction, and in particular with roofing, because he often has to install the installation on the roofs of buildings. Appropriate technical knowledge, mainly in the field of electricity, is also needed in such a position. 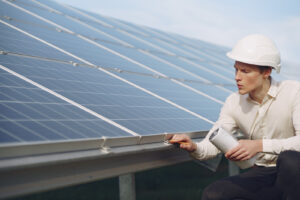 How much can you earn?

We now come to the heart of the matter - in fact the most important point for anyone who wants to become a fitter. The earnings for this position vary. The most important criterion that determines the rate paid to the fitter is his experience in this profession. It is worth bearing in mind that having permissions is nevertheless a key factor. If the candidate for fitter does not have them, he can only help with assembly. The voivodeship in which we operate also has a significant impact on the price of services. You need to pay attention to the seasonality of works, because panels are usually not installed in winter.

As we have already mentioned, to work as a solar panel fitter you need, among others entitlements. The course, thanks to which you will acquire electrical qualifications, can also be taken at the SPA Operators Training Center. The training ends with a state examination. Our instructors thoroughly prepare the participants for this. We invite you to take advantage of the offer of our Center. In order to arrange details such as price, please feel free to contact us.

« Stacker crane - operation and maintenance
Legal labor protection - what should you know? »
Sign up for training
Inquiry