What is first aid? 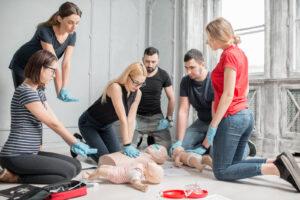 Most people in a life-threatening situation panic and do not know what to do. In such circumstances, when every minute is at a premium, the most important thing is to understand how to give first aid correctly.

First aid is a set of actions designed to save a human being until emergency medical services arrive. It aims to prevent further exposure of the victim to danger, the development of serious complications and thus save lives. It is effective when given immediately or as soon as possible - within the first 30 minutes and, in cases of chemical injuries, the first 10 minutes - from the moment of the incident - count. Anyone who is in the vicinity of the victim at the critical moment can provide first aid. It is a basic but very important skill. In an emergency, it can save someone's life.

What action should be taken?

The main principle of first aid is "do no harm". To avoid mistakes and to administer it correctly, the following sequence of actions should be followed: 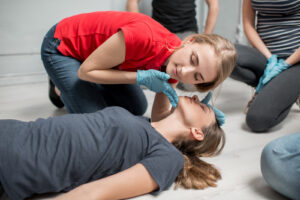 Artificial respiration is the introduction of air or oxygen into a person's airway to restore natural lung ventilation. The most effective and simplest methods of restoring airway patency for an amateur first aider are mouth-to-mouth and mouth-to-nose breathing.

It is a set of actions aimed at restoring the vital functions of the body and bringing it out of the state of clinical death. Cardiorespiratory resuscitation involves massaging the heart by compressing the chest to a depth of 6 cm and performing rescue breaths; 30 compressions should be performed, followed by 2 rescue breaths, then returning to compressions in a 30:2 sequence.

Positioning in an attentive safety position

If an unconscious casualty is breathing on their own, they should be placed in the lateral safety position. This position protects against possible tongue collapse, choking, and allows the airway to remain open. The casualty should be placed in a stable position as far to the side as possible and the head tilted back so that there is no pressure on the chest.

These are a set of actions aimed at stopping blood loss. First aid here involves stopping external bleeding. Several methods are currently used to temporarily stop the bleeding: direct pressure on the wound; application of a pressure dressing; finger pressure on an artery; maximum flexion of the limb at the joint; application of a tourniquet.

It is a break in the continuity of the bone. The fracture is accompanied by severe pain, sometimes fainting or shock, and bleeding is also possible. To protect the fracture, it must be immobilised along with the joint above and below it and a splint applied.

It is damage to body tissues caused by heat or chemicals. Initially, the burn should be dressed and disinfected, then the wound should be rinsed with cold water, a sterile dressing applied and a cold compress applied.

We speak of hypothermia when the body temperature drops to 35 degrees Celsius or below. In this situation, the victim should be taken to a warm place or given warm clothing and given warm food and drink.

Frostbite is damage or necrosis of body tissues caused by exposure to low temperatures. Frostbite of the fingers and toes, as well as of the nose or ears, is common. In this case, the affected person should be placed in a warm place, the soaked clothes removed, the frostbitten area wrapped and a warm meal or hot drink given.

It is a sudden loss of consciousness caused by a temporary disruption of blood flow through the brain. In other words, it is a signal that the brain is not receiving enough oxygen. In such a situation, the victim should be placed in a comfortable horizontal position and given access to air. You can splash cold water on the victim's face and lightly pat the cheek. If a first aid kit is at hand, a cotton swab soaked in ammonia can be given for sniffing. Once the victim has regained consciousness, it is a good idea to give them strong tea or coffee.

Drowning is associated with water entering the lungs and airways, which can lead to death. The first stage of assistance is to pull the victim out of the water. When the victim is not breathing and has no pulse, CPR should be performed. The casualty should then be placed in the safe side position.

Sunstroke is also a threat during the summer. This is a disorder of the brain caused by prolonged exposure to the sun. When giving first aid, first of all, move the victim to a cool, airy place. Then apply a cold, wet towel to his head and neck. The injured person should also drink plenty of cool water.