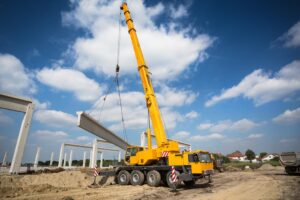 HDS cranes - these are reloading devices which, thanks to their compact design, are able to reach any place and perform many works unavailable for other cranes. The abbreviation HDS itself stands for a hydraulic truck crane, it is responsible for the functionality of the truck. Placing the crane in the loading area on the truck guarantees full mobility and comfortable movement between the loading and unloading points. Hydraulic cranes can lift loads weighing from several hundred kilograms to several tons. This equipment belongs to the group of cranes, i.e. machines used for loading and unloading goods. HDS cranes are mechanically driven reloading devices, which consist of a pivoting column on the base and a boom system mounted on the top of the column. The loading cranes are mounted on vehicles or semi-trailers. They have a wide range of applications.

Due to their structural adaptation to various industries, HDS cranes are divided into: general purpose, having a rigidly mounted structure on the vehicle chassis, and devices used in the wood industry, equipped with special grippers, and loading cranes at the rear of the vehicle with a load box. There are also loading cranes located in the middle of the vehicle.

What is the construction of the HDS crane

The construction of the HDS crane consists of fixed elements that are an indispensable equipment of every HDS and variable parts that are replaced depending on the tasks performed by the device. The most important fixed elements of an HDS crane include:

The crane's variable elements can be adapted to the current tasks performed by the devices. We include among them:

Crane truck - where can it be used?

More about the types of HDS cranes:

In terms of the place of installation of the portable crane, the following are distinguished:

The main structural elements of the loading cranes are:

HDS cranes are based on hydraulic technology - their elements are controlled by a hydraulic system.

Appropriate qualifications are required to operate reloading cranes - they are granted after attending the course and passing the state exam before the Office of Technical Inspection. During the course, participants learn everything in the context of the theory of construction and operation of the device, as well as the principles of health and safety at work, and it also includes practical exercises, thanks to which participants of the course learn how to properly operate the equipment.

HDS cranes can be used both in the open air and in closed spaces, such as halls, but with the proviso that they should be properly ventilated, otherwise there is a risk of poisoning by exhaust gases. Mobile cranes should never be used in gusty winds or storms. Work should also be suspended when visibility is limited.

The vehicle must be properly positioned and properly leveled. Details on the crane's maximum allowable tilt can be found in its technical data. The substrate must be adequately durable, in the event that it is uneven or boggy, it is necessary to use special stabilizers and pads.

Before starting work, the operator of the crane should always check that there are no bystanders in its zone. The crane's work area must be appropriately separated and marked. The vehicle must have beacons turned on, handbrake on and chocks to prevent movement of the wheels. The operator of the device must be equipped with appropriate personal protective equipment - appropriate footwear, a protective helmet, and non-restrictive clothing.