What is the crane used for? 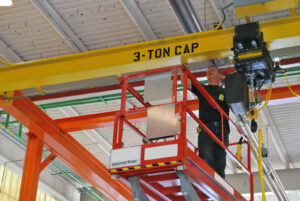 An overhead crane as a type of UTB is used to move heavy loads. In simplest terms, it is used to lower and raise goods vertically or horizontally via a hoist or winch. They are characterised by their simple design. They are most commonly used in industries such as transport, manufacturing or construction. When it comes to the design of an overhead crane, it is important that it has adequate strength and fatigue life. The idea is to ensure safe operation of the machine, which can be disrupted by static and dynamic loads.

Overhead cranes are used in ports, warehouses and also in transport companies. The use of cranes makes it easier and quicker to carry out work. Girders are a part of the load-bearing structure used singly or in pairs, and are usually made in the form of a welded box structure. It is possible to distinguish between a girder whose ends are supported on cranes perpendicular to them, equipped with castors. The trusses, together with the girder, are made of steel of adequate strength. The connection between the cranes and girders enables the longitudinal movement of the crane bridge relative to the substructure.

The winch/ hoist/ winch system is responsible for performing the vertical lifting movement. The most important traction systems are steel cables or chains. Overhead travelling cranes with rigidly guided hoists are also common. The mechanisms for implementing the travel movement are based on working in two mutually perpendicular directions. . This creates the conditions for the working space. As far as the electrical installation is concerned, the most common methods used are cable ducts (cable curtains) and cable guides. Cable curtains are flexible cables mounted on cable trolleys, which form a system mainly for powering a hoist or winch. In contrast, the most common for gantry cranes are cable curtains, which are fed to devices suspended from the crane hook, such as an electromagnet.

Mechanical equipment of the crane:

Electrical equipment of the crane

There are different types of cranes. The differences relate, for example, to the type of drive Overhead cranes can have electric, hydraulic, manual and also pneumatic drive. There are also mixed drive models. 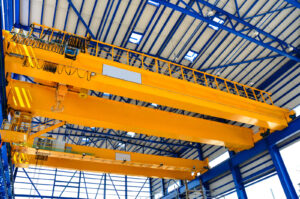 There are four main types of crane:

Overhead crane - mainly installed in industrial halls. The operator has the option of operating from the ground or from the operator's cab, which gives him freedom and access to the most complex areas.

Gantry crane - is most often installed outdoors, for example at railway sidings. They can have two or more gates and have wheeled or rail chassis. A linkage moves on the platform.

Suspension crane - usually consists of a single rail. It takes up little space in the hall and allows optimum use of the room. Compared with overhead travelling cranes, they have a lower installation height.

Half gantry crane - the operation of this type of crane involves intermittent movement....

Markings on the crane

Directional pictograms, which are available in several colours and must be understood by those in the area of operation of the device, are placed in a clearly visible position. Examples of markings and their correct interpretation:

The colour scheme is not coincidental. The arrow marking relates to the direction in which the hoist is moving. The arrows at 45 degrees are related to the direction of travel of the crane bridge. Modern cranes marked with virtual warning signs are also available on the market. Installed lights on the crane will display the point or area where the machine is in operation.

To operate overhead cranes, it is necessary to have the appropriate qualifications, which can be acquired by training in a professional center and by passing an appropriate exam. The course prepares you to work as an operator. The most important thing is the safe operation of these devices. In addition, knowledge of health and safety regulations will translate into a reduction in the risk of accidents at work, and may also contribute to increasing work efficiency. During his work, the gantry must remember to observe all procedures and health and safety rules so that the work performed by him does not pose a threat to himself and others. The operator is prohibited from:

« Welding of plastics
What does it take to obtain TDT certification? »
Sign up for training
Inquiry