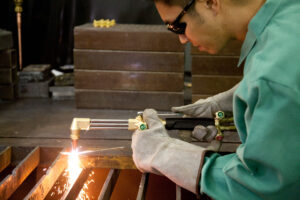 Plasma cutter or cutting torch - metal cutting is a common part of many welding jobs, whether it is done in a workshop or on a construction site. The two most known, frequently used methods of cutting metal are plasma cutting with a plasma cutter and oxygen-gas cutting with the use of a specialized torch. Both systems have advantages and disadvantages, so choosing the best one depends on many factors, including:

Cutting torches have been selected for cutting metals for a relatively long period of time because of the possibility of using them in non-stationary conditions. The work was like attaching a suitable burner to the cylinder and starting the work. However, advances in technology mean that plasma cutters are smaller and smaller and their mobility is gradually increasing.

The gas cutting method is the most commonly used method of separating metals, especially low-alloy and low-carbon steels. The effectiveness of the method is due to the design of the burner. Blows oxygen beforehand by burning it in a specific proportion with the combustible gas. The combustible gas used for heating is most often acetylene or propane-butane. Oxy-acetylene cutting gives us a very high temperature that can be achieved quickly. However, often taking into account the economy and the lack of the need for rapid heating, propane-oxygen cutting is used.

Plasma cutting involves ejecting and melting metal from the slit of the incision. It is made of a highly concentrated plasma electric arc with very high kinetic energy spreading between the cut object and the non-consumable electrode. This ionizes the compressed gas and, thanks to the high concentration of power, produces a plasma stream. The plasma arc focuses a nozzle mounted in the torch. Its walls are cooled and cause the narrowing of the arch column. Plasma cutting uses the very high temperature in the arc core and the high velocity of the plasma jet. The most frequently used plasma gas is air, and in machines with higher power, nitrogen, argon, carbon dioxide, hydrogen, argon and hydrogen mixtures or argon and helium are used. Using a plasma torch, we can cut materials made of carbon steel, aluminum and their alloys, as well as copper and cast iron. 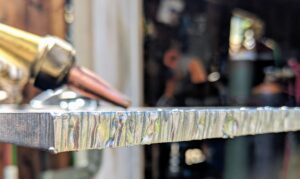 Plasma cutting uses electricity to produce incredibly high thermal energy which melts the metal and the plasma gas stream blows it away very quickly. On the other hand, cutting with oxy-fuel burners is a process consisting in creating an exothermic reaction with the metal being cut. No reaction is possible with non-ferrous metals, for example stainless steel or aluminum.

Oxy-gas cutting finds its application wherever there is a need to cut thicker metals from ordinary steel. Due to the low price of the equipment, great possibilities and cheap operation, the scope of application of a given method is very wide. It includes, among others, work in workshops, large enterprises or home farms.